Houses are essential in your SimCity Social city planning. With more population in your city, you can unlock various buildings as well as purchase additional land area. Houses start with 4 population (2x2 House). You can increase population by placing houses near attractions, decorations and water. Each house can have a maximum population of 1,600.

Normally, the level of house is limited to level 9. During this event, you can upgrade houses to reach up to level 11.

Once unlocked, any level 9 building that would have a population of 1,080 will automatically upgrade.

Once unlocked, any level 10 building that would have a population of 1,600 will automatically upgrade.

The small sized house that created by house, when they have only in 1x1 size

The short sized comes when the available area is less than 2x2. This type of house comes in size of 1x2 and 2x1.

We currently have no pictures of the buildings. :(

The regular sized house with size of 2x2 block 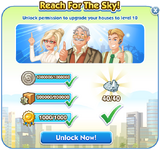 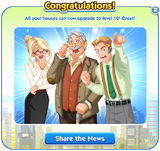 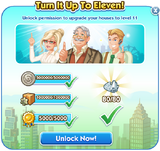 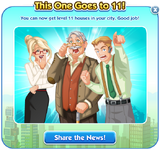 Level 11
Add a photo to this gallery
Retrieved from "https://simcitysocial.fandom.com/wiki/Houses?oldid=16522"
Community content is available under CC-BY-SA unless otherwise noted.